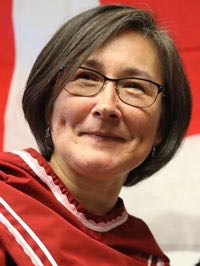 Lisa Qiluqqi Koperqualuk was born in Puvirnituq, Northern Quebec (Nunavik). Raised by her grandparents Lydia and Aisa Koperqualuk, her elementary schooling was done in Nunavik. With a Bachelor’s degree in Political Science from Concordia University, Montreal, she holds a Master’s degree in Anthropology from Laval University, Quebec City.

Fluent in Inuktitut, English and French, Lisa acted as Communications Officer for Makivik Corporation for seven years and participated in various regional, national and international fora such as Inuit Circumpolar Council General Assemblies in Kuujjuaq 2002, in Barrow 2006 (as a delegate) and elected in July 2018 in Utqiaġvik as Vice-President International for ICC Canada.

Lisa is a member of the Kativik Environmental Quality Commission (KEQC) since 2010, an independent decision-making body responsible for evaluating and reviewing development projects in Nunavik. Created by virtue of the James Bay and Northern Quebec Agreement (JBNQA), KEQC is governed the JBNQA and the Environmental Quality Act of Quebec.

As the co-founder and former president of Saturviit Inuit Women’s Association of Nunavik, the issues of social justice concerning Inuit women and children lead her to spearhead a study looking into the Inuit women’s situation in Nunavik based on their perspective. The Restore Hope and Peace report raised issues expressed by Inuit women of Nunavik on housing needs, education and employment, violence and abuse and the justice system in Nunavik.

She works for Inuit interests in self-determination advocating Inuit political and economic autonomy, social justice (particularly through Inuit law), and protection of the environment, culture and language.
She is the mother of two boys, the eldest being involved in Inuit arts and the youngest being a pilot for Air Inuit. In her hobbies she enjoys outdoor activities such as hiking, fishing in the north, berry-picking on the tundra, and travelling. She has been practicing karate for nearly 25 years and currently assists in the instruction of karate in the same dojo she began her training. 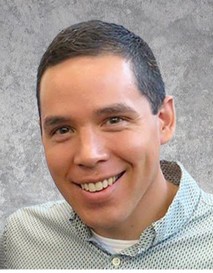 Natan Obed was elected in September 2015 as President of Inuit Tapiriit Kanatami and assumed the role of Vice President of National Affairs for ICC Canada.

Natan is from Nain, Nunatsiavut. Prior to moving to Ottawa, he lived in Iqaluit, Nunavut for 10 years, where he worked for Nunavut Tunngavik Inc. as the Director of Social and Cultural Development. NTI represents the rights of beneficiaries of the Nunavut Land Claims Agreement.

Obed has devoted his entire professional career to working on behalf of Inuit representational organizations to improve the health and well-being of Inuit in Canada.