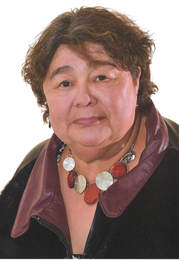 Mrs. Monica Ell-Kanayuk was elected to the Inuit Circumpolar Council at the 13th General Assembly in Utqiaġvik, Alaska, in July 2018.

She was a member of the Nunavut Legislative Assembly from 2011-18 and served in a number of portfolios, including Health, Economic Development and Transportation, Family Services, and as Deputy Premier for Nunavut. Mrs. Ell-Kanayuk was also Minister Responsible for Homelessness, the Qulliq Energy Corporation and the Status of Women.

Ms. Ell-Kanayuk owned and operated her own small business called Arctic Creations for 8 years and employed over a dozen Inuit women who worked from home on sewing projects that she would sell at her retail store. In 1996, her business received the “Business of the Year” award from the Baffin Chamber of Commerce.

She has served on a number of boards, including the Nunavut Business Credit Corporation, Nunavut Economic Forum, Baffin Regional Chamber of Commerce, Pauktuutit Inuit Women’s Association, and Atuqtuarvik Corporation.